For part one of this series, see Paradise on The Platte. 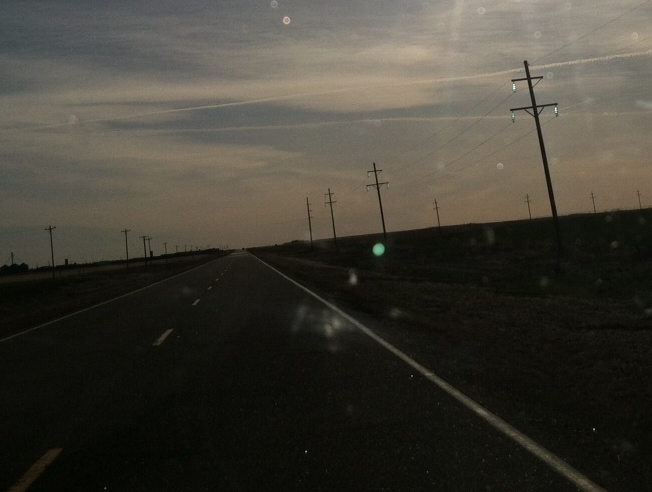 Past Elkhart, the road roughened crossing into Oklahoma; glass insulators gleamed on power poles stretching to the distance. The route through the Panhandle at this point is 71 miles of loneliness, punctuated by Boise City, threading just south of Colorado’s border and north of Texas by a hair.

Rabbit Ear Mountain, that sentinel of U.S. 56, loomed as I passed into the Land of Enchantment, and I gained an hour from Mountain Time. Twelve more miles got me to Clayton, where I pulled off to a parking space along the main drag and, realizing I had the tools to avoid the hot beef disaster from earlier in the day, asked my phone where to eat.

I also really, really wanted a cold beer. My butt was killing me from two days of driving, and there were motels visible from the parking lot. I had made it to New Mexico. I could eat and crash. But there was no beer available at The Rabbit Ear Cafe–just the typical line-up of sodas, plus real brewed iced tea–which ended up being the perfect accompaniment to my awesome tamale plate with green chile sauce and homemade beans and rice. I walked out the door somewhat revived and completely satisfied, and with the rest of my tea in a to-go cup, sat down on a bench with my road atlas to decide what to do next.

U.S. 56 ends at Springer and Interstate 25, which heads south toward Las Vegas (no, not that Las Vegas) and then loops up toward Santa Fe, then down again toward Albuquerque and eventually, Los Cruces. My intention was to avoid long stretches of  interstate and heavily populated areas as much as possible (as well as going north when I meant to go south) while making my way across the state and into southeastern Arizona, so I wanted an alternate route. Fortunately, there is this little two-lane (402) running from Clayton to Nara Visa, which sits at the junction of another diagonal highway, U.S. 54. With a fresh infusion of caffeine coursing through my veins and an hour or two of daylight left, why not?

New Mexico is not only gorgeous, has more consistently delicious food than most other states, and is fully deserving of its “Land of Enchantment” moniker, it is really, really big. Despite getting one measly page in my road atlas (while horizontal Kansas, Nebraska, and the Dakotas all get two), New Mexico is the fifth largest state. And, when you consider that its ranking puts it behind only the truly enormous states of Alaska, Texas, California, and Montana–well, it’s hard for a New Englander–even one turned prairie gal for over two decades–to fully comprehend. Unless, of course, she drives across it. Twice.

New Mexico 402 is a narrow, lonely two-lane through the Kiowa National Grassland hills blazing in the sunset. There are two towns between Clayton and Nara Visa that (as I discovered is true for many points on the New Mexico map) are virtually abandoned. Or probably there wasn’t much there to begin with. Either way, the service they provide is more about seeing that you are making progress toward your destination than giving you a place to pee or buy a cold drink. You quickly learn to use the bathroom and gas up whenever you get a chance rather than waiting for the next town indicated on the map.

From Nara Visa, it is another 24 miles to Logan which, despite being the same font size on my map as many other towns with no services, has plenty of them due to the presence of Ute State Park just on the edge of town. I pulled into a cute little motel called the Yucca and, after petting the office kitty, got a room for less than forty bucks. It was a little shabby in that old-family-run-motel-near-the-state-park kind of way, but it was perfectly clean, and the decor was old-school kitschy cabin goodness.

I ended up staying in the Yucca twice–once on the way out, and once on the way back. My only real disappointment there was failing to eat at the cafe next door, whose chile-laden menu is displayed over four delicious photocopied pages in the hotel rooms’ information book. I missed it on my way into town when all I wanted was bed (and one of the beers in my cooler), and when I left the second time, it was 5:45am and I assumed it wouldn’t be open (it was, but with a major storm rolling in to the north, I was thinking more about miles than a meal).

The gas-and-restroom lesson is one most travelers of rural regions are familiar with, but the other hard lesson of this trip (and one that never quite set in) was taking off in the morning without eating first–especially when there was a promising-looking cafe in the vicinity. I’m not usually an early eater, but by late morning I can get desperate enough to make a bad choice. That happened in Hoxie, Kansas, and it might’ve happened again in eastern New Mexico had there actually been any place to eat on my route (though, as I said before, New Mexico doesn’t seem to have much bad food).

I passed through Tucumcari (TWO-come-carry) and it was still too early to eat; I followed a sliver of I-40 to Santa Rosa and then south again on 54 and west on 60. By the time I got to Willard, I was desperate enough for a bathroom that I begged the postmistress to let me use hers–only then seeing “No Public Restroom” signs on the door she blessedly unlocked for me. But there wasn’t anything else public in Willard–all the old business were boarded up with “For Sale” signs bleached from the sun, and the grassland plains don’t offer much to hide behind along the roadside.

In Mountainair, I stopped in front of the historical marker and tried to use my phone again to seek out food, but I couldn’t even get a signal. Then, looking off to the side, I saw a sign advertising an old, historic inn nearby with great, fresh food and a welcoming atmosphere. It turned out to be closed as well, so I headed back to the main drag behind an old lime-green painted Chevy pickup with Bernie Sanders “Honk for a Political Revolution” and “Wolves Against Sarah Palin” stickers. Yes, I was truly in New Mexico.

Parked in front of the post office, I practically assaulted a young woman walking down the street (she had ear buds in) in order to find a place to eat. Once she realized I was yelling at her, she smiled broadly, pulled out the buds, and pointed me to Alpine Alley–a funky little coffee house and sandwich place where the regulars are crusty with each other, but kind and generous with visitors. In keeping with my vow to eat green chile at every meal in New Mexico, I had the “Sophia Loren” wrap and grabbed a scone for the road. 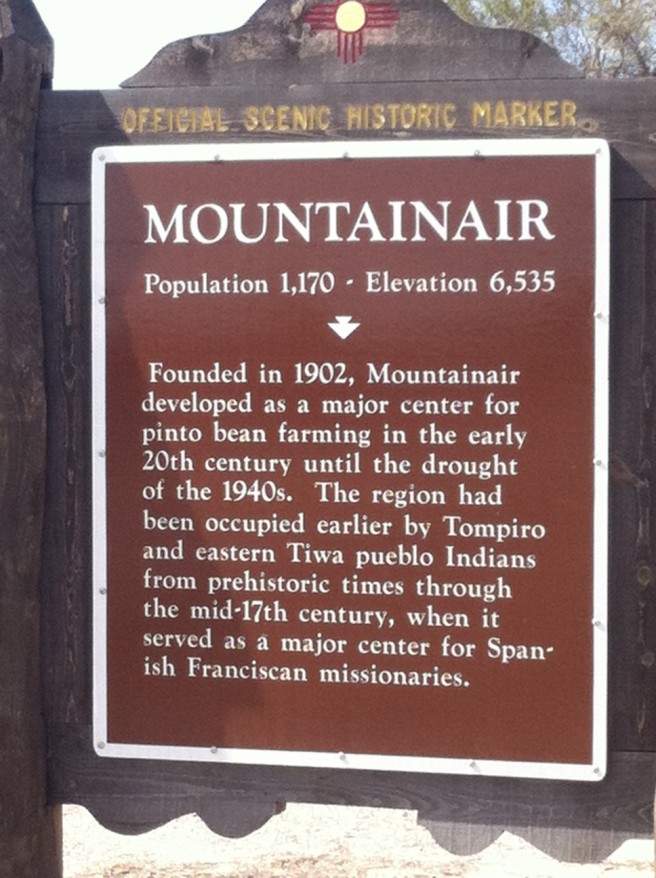 From Mountainair, I headed on, down into the Rio Grande Valley, and then up through the mountainous western part of the state. For that tale, my friends (which includes the Continental Divide and famous PieTown–see how I managed to keep my green chile pledge!), you’ll need to read the next installment of the road trip series.