In early February, I got a call from an old friend in Southeast Arizona whom I hadn’t seen in a few years. She’d heard I was moving (and yeah, also about the divorce and leaving my job), and wondered if, being somewhat untethered by other obligations however briefly, I might want to pay her a visit and see some of the work she was doing for a watershed restoration project down in the Chiracahua Desert.

Now, I’m not much of a desert girl, but after six winters in Minnesota (during which I learned I’m a much happier person if I commit to wearing long underwear every day), getting to a warmer clime for a week or two, seeing things growing and flowering (even on otherwise inhospitable plants), and eating lots of green chile seemed like a really fine idea.

Still, it was a full month (filled with packing and moving, stresses and negotiations and endless hours on the road) before the trip blossomed as a genuine possibility in my mind. The date for leaving was set not quite a week in advance, and all the fine details about animal care and car tune-up and eating all the leftovers came quickly after.

The day before I departed south- and west-ward, I drove the seven-hour round trip north to Minnesota to deliver the dog to my ex, pack my garden tools, and give him a tour of what herbs were popping up in the gardens that he could eat. Then, to stretch my muscles a little more (and because I couldn’t stand the look of the thing), I spent another half hour or so cutting back and cleaning up perennials in the triangle prairie garden I planted last summer.

Needless to say, I didn’t plan on leaving first thing the following morning. But the majority of that calculation didn’t have anything to do with the time I’d spent on the road the day before. It had to do with cranes.

I’m not a big subscriber to the whole “Bucket List” mentality–maybe because there are lots of things I have wanted to do before I die that turned out (so far) not to be a big deal whether I did them or not. But, after explaining that to my kid and describing my own list as “stuff I’ve really wanted to see or do if ever I get the chance,” he turned to me and said, “Mom, I think that’s pretty much a Bucket List.” Damned teenagers.

One thing I’ve really wanted to see for a long time was the migration of Sandhill Cranes along the Platte River in Nebraska, and it turned out my timing for this Arizona trip took me right through that area, and at just the right time. 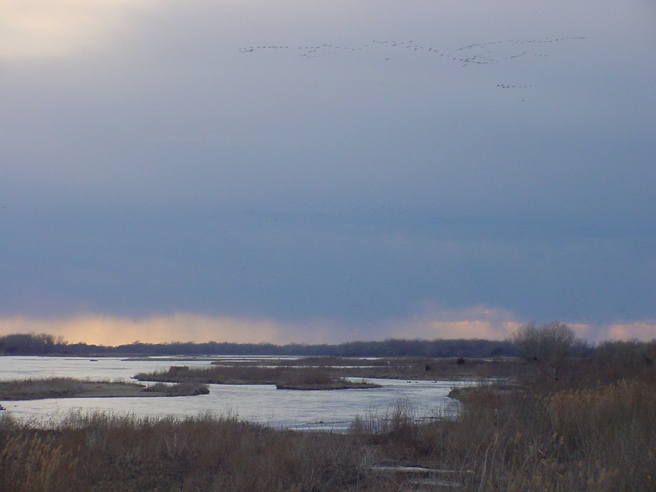 I arrived at the Crane Trust outside Grand Island in the early evening, about an hour before sunset. I’d called a couple days in advance, but there wasn’t any room in the viewing blind for that evening, so I just used their bathroom and asked where to find the public viewing bridge. Maybe you wouldn’t think that a place in the middle of Nebraska would be spectacularly busy on a Monday night, but all the viewing blind slots were packed, and so was the viewing bridge–a long, wooden platform constructed just off the highway about a mile south of the Crane Trust Center. 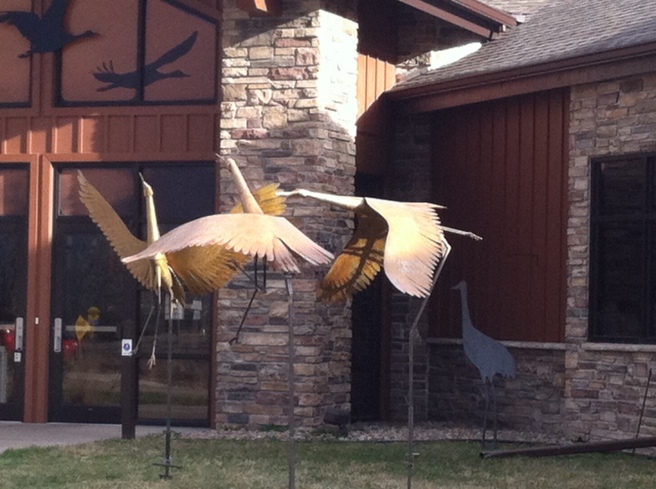 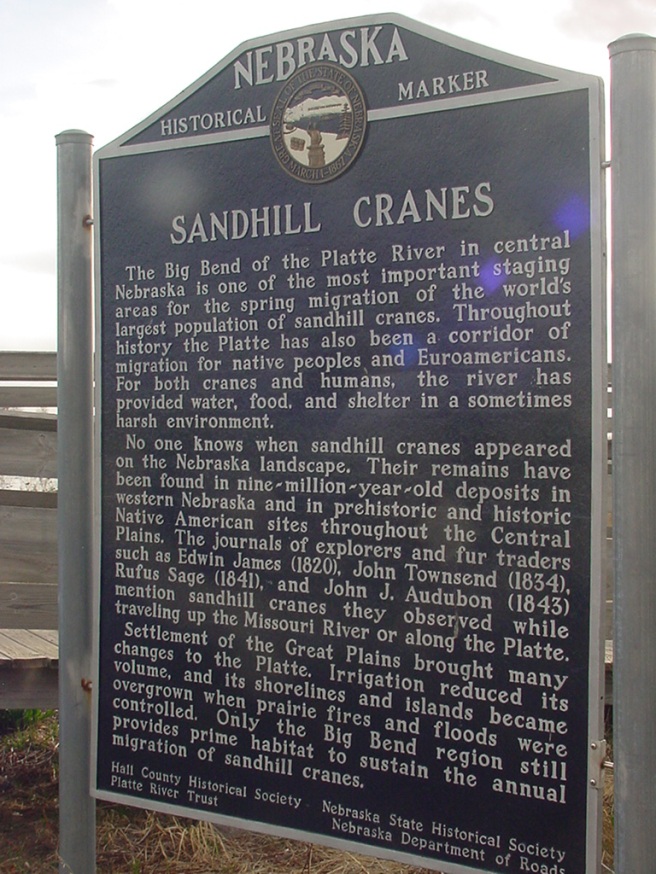 I got there just early enough to secure the last parking space in the little dirt lot, and then the roadside started filling up, too. It was a little scary because trucks were cruising over the Platte River bridge at about 50mph, blaring their horns at the bird-watchers wandering in the road, their eyes to the sky rather than on the fact they were about to be flattened by oncoming traffic. Oy vey.

The other problem with the viewing bridge is that not only are you right by the road, you’re also massed in plain sight, and people are talking and laughing and generally not paying attention to the fact that cranes are shy of people, and all that ruckus makes it extremely unlikely that a single bird is going to come in anywhere near where you’re perched.

Still, I would not call it a waste of time. Among the many beautiful prairie rivers, the Platte is a real stunner, especially in the spring, at sunset, with a thunderstorm in the distance and the prehistoric cacophony of tens of thousands of cranes coming in to roost (albeit far downriver of where you happen to be standing). Satisfied with the experience, I got back in my car, and headed west just before sunset, intending to put a few more miles under me and toward my ultimate destination. And then…

The road from Grand Island to Kearney (and beyond) is flanked by cornfields between the interstate corridor and the Platte, and it is in those cornfields that Sandhill Cranes forage during their brief March visit. As I pulled onto I-80 and drove into a sunset blazing beneath deep blue storm clouds streaked vivid with lightning, I noticed patches of grey and sparks of red flashing from the fields. Cranes are shy of people, yes, but they’re not shy of traffic blazing by at 75 miles per hour.

As I rocketed along beside semis and passenger cars and pickup trucks, hundreds and hundreds of cranes–in twos and threes and fives and more–were lifting off from the fields alongside the interstate, swooping just a dozen feet or so over the traffic, back-lit by the sunset, heading toward the river.

So, here’s me: laughing, crying, singing, hollering random lines of ecstatic poetry, driving 75 miles per hour down the interstate toward Kearney, Nebraska, squinting through a bug-spattered windshield at a prairie sunset and the lines on the road I’m sharing with fully-loaded semis, when the actual thunderstorm hits.

And now, I am blinded simultaneously by a torrent of rain and its refraction through blazing colors and there is this crazy huge THING in the distance looming across the road, and I think maybe there are a few other things on that Bucket List that I might want to get to, so I get the hell off the road.

And that, my friends, is just (most of) the first leg of the road trip adventure.

Next stop: The Great (No, Really!) State of Kansas.

One thought on “Road Trip Part 1: Paradise on the Platte”